Past Programs and Events 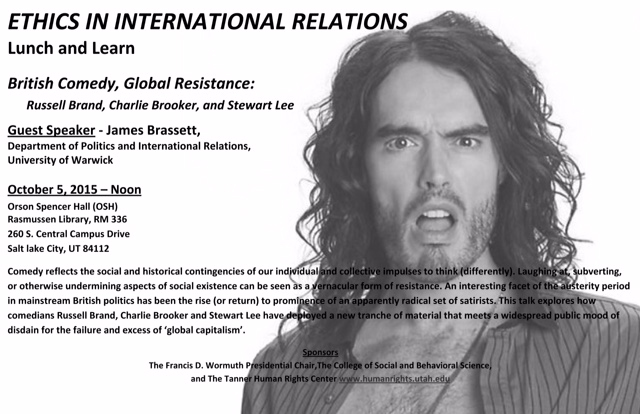 Ethics in International Relations is a two-day event that includes forums, presentations  and a workshop-symposium that gathers an international group of the leading scholars in this field. They assess how ethics matters in International Relations and how can we talk about ethics in an increasingly complex and uncertain world. These scholars determine the major research topics and fields that constitute this study, assess what draws them to study Ethics to as a subject, discuss how they teach it and engage it in their courses and research, and how they reach out to their broader communities about the themes of Ethics in International Relations. It is sponsored by the generous support of the Tanner Center for Nonviolent Human Rights Advocacy, the College of Social and Behavioral Sciences, and the Francis D. Wormuth Presidential Chair. 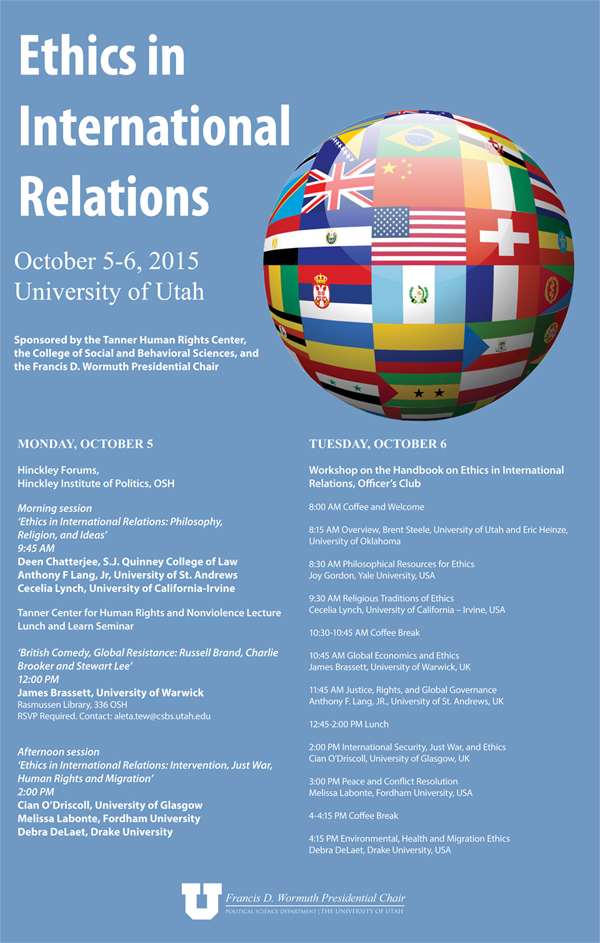 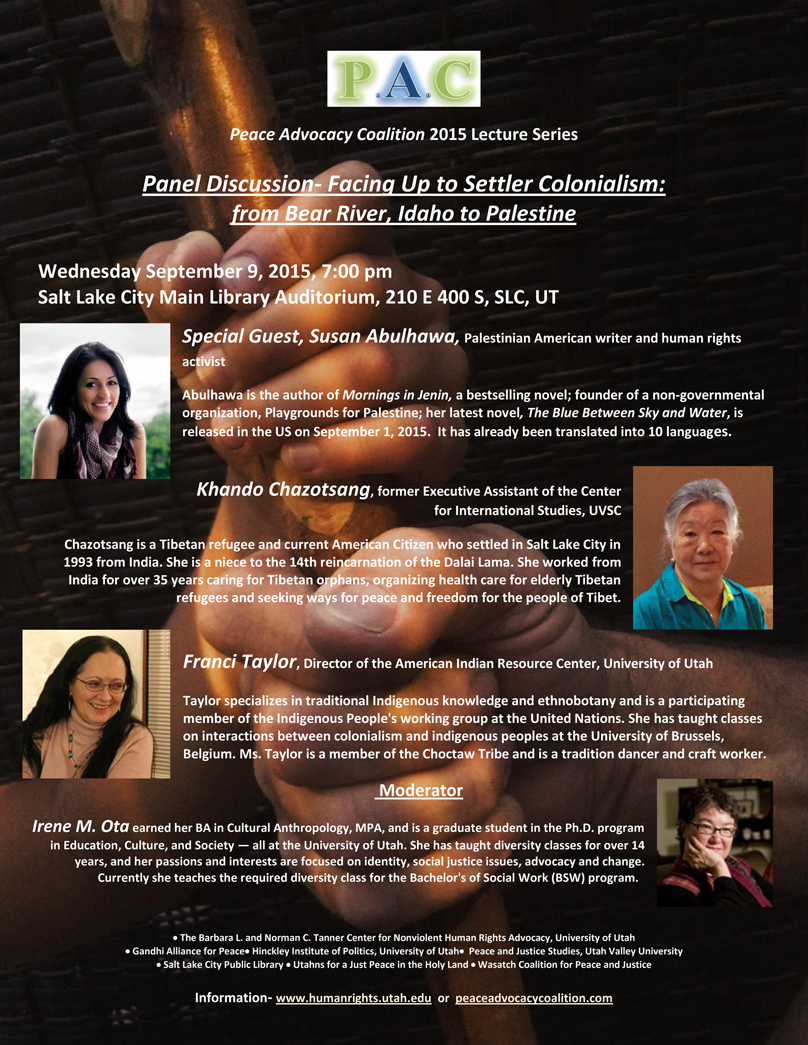 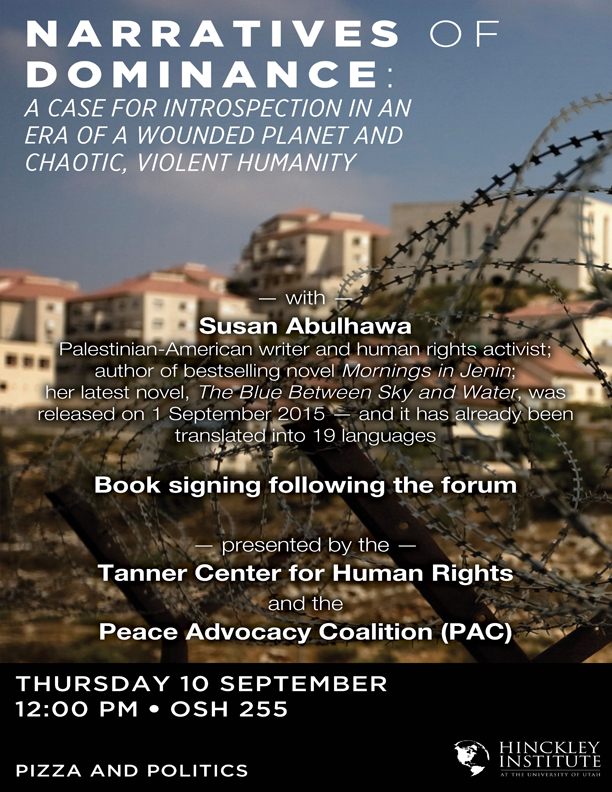 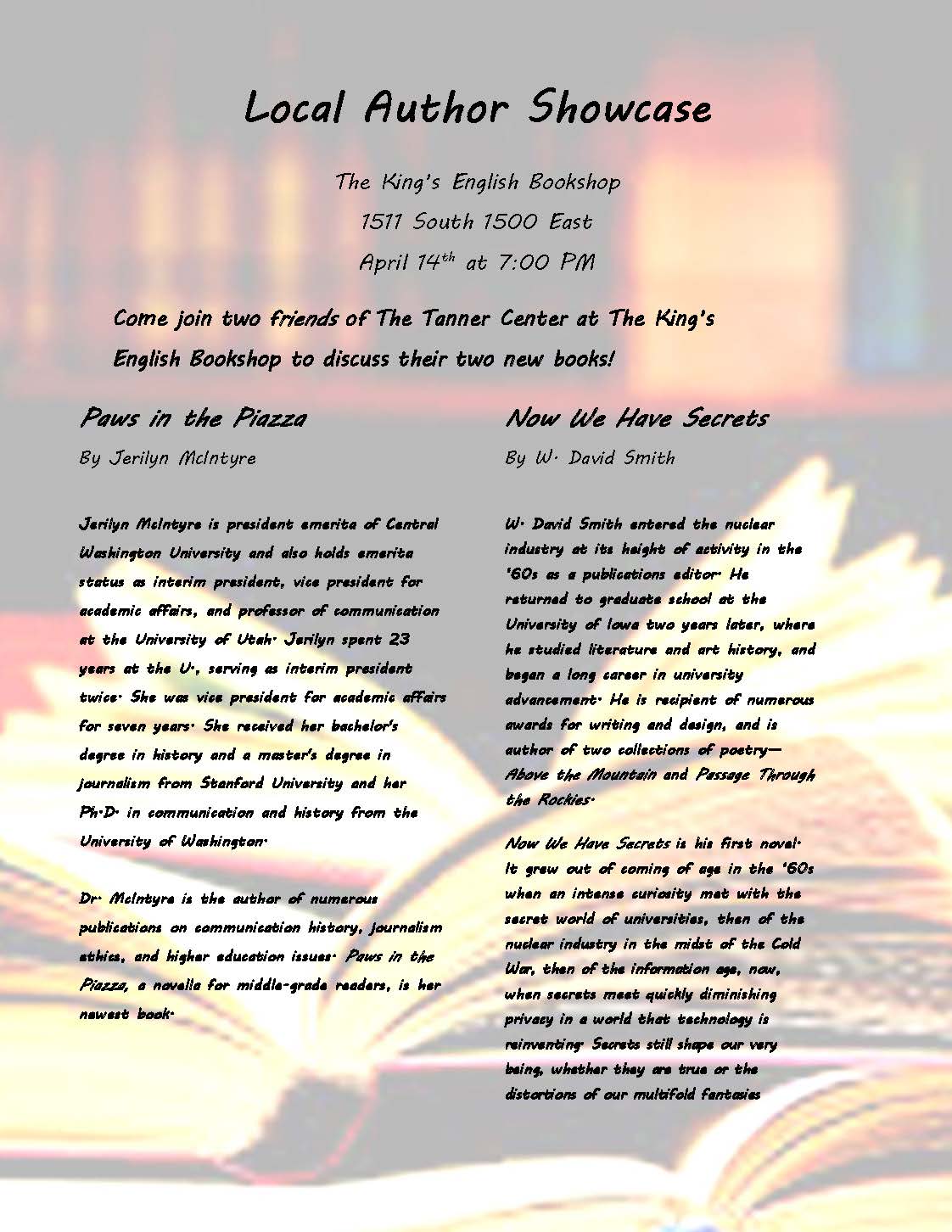 An Evening with Jane Goodall 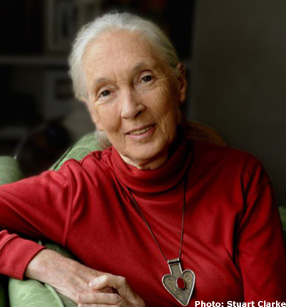 An evening with world-renowned primatologist and conservationist, Dr. Jane Goodall, United Nations Messenger of Peace, founder of the Jane Goodall Institute and Roots and Shoots. Presented by the University of Utah's College of Humanities in partnership with the Environmental Humanities Graduate Program and Pax Natura Foundation.

A Tanner Center event helping the Sociology Department with their scholarship fundraiser - a great event! 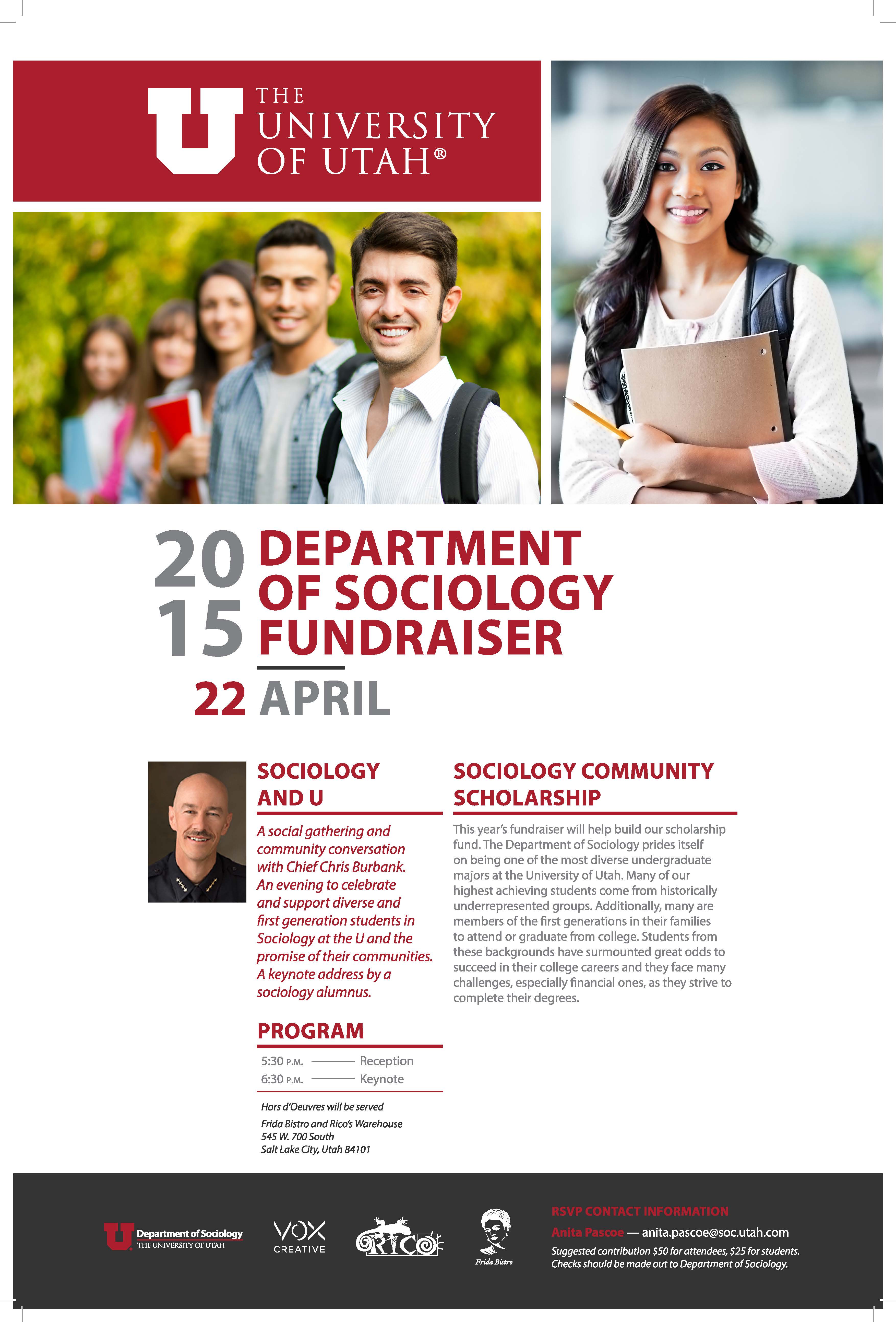 In Their Own Words: The Military Veteran Experience:  Military veterans and family members will share their experiences of serving in the military and life since leaving the military, as expressed through writing. Military personnel, veterans, and families will be invited to read and then discuss their written work with the audience. Military personnel, veterans, and family members from all eras will be invited to participate. 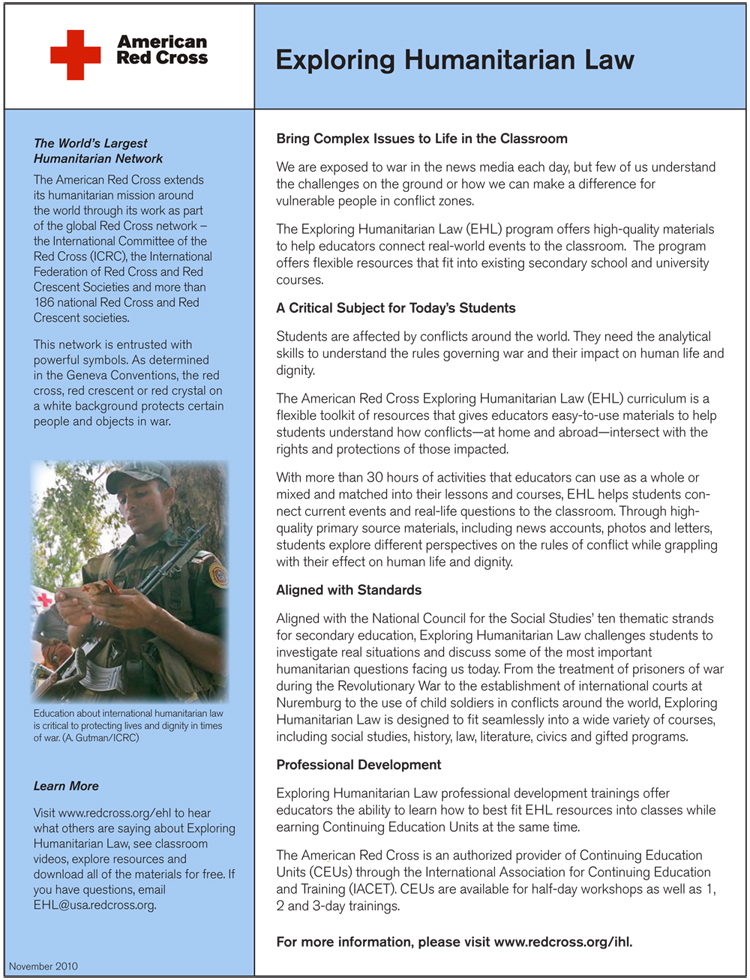 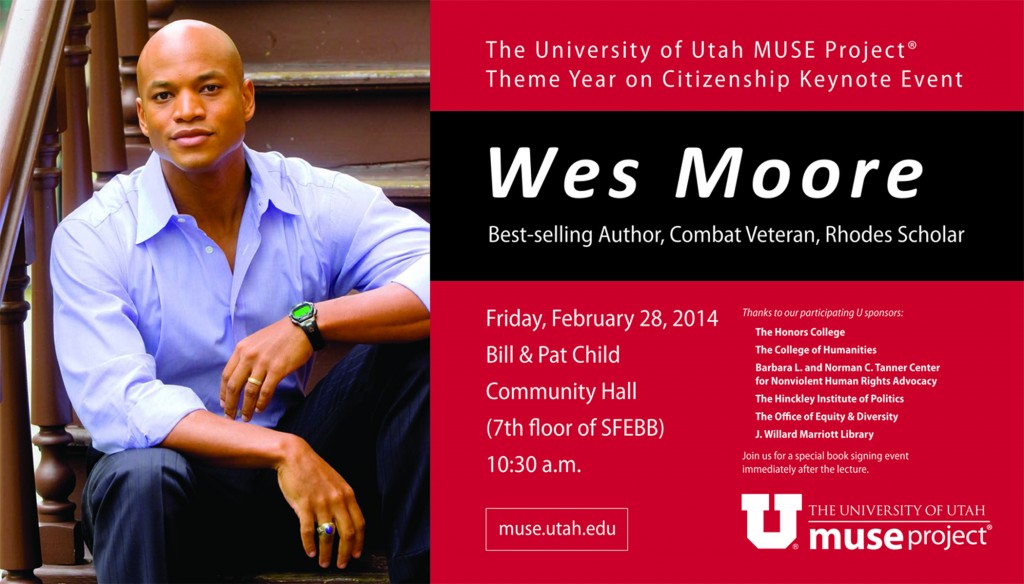 To see the full agenda for the conference click here >>

The Tanner Human Rights Center along with the Utah Film Center & Downtown Library announce the Film Screening- Inequality for All. Followed by a discussion panel with film director, Jacob Kornbluth. Visit http://www.utahfilmcenter.org/event/inequality/  for a trailer of the film and more information. 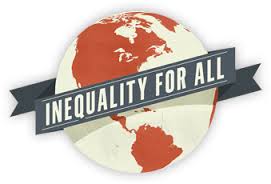 In collaboration with the Carnegie Council for Ethics in International Affairs, the Tanner Human Rights Center will examine new challenges to peace in the early 21st century—challenges that would not have been clearly envisioned 100 years ago when Carnegie's philanthropies were established. Three such challenges that we propose to explore are environmental degradation and its impact on international relations, violence by non-state actors, and global economic inequality.  Our purpose is not just to document these challenges but to examine how new forms of global ethical dialogue and interaction can lead us to effective non-violent responses to these challenges.

To see the full agenda for the conference click here >> 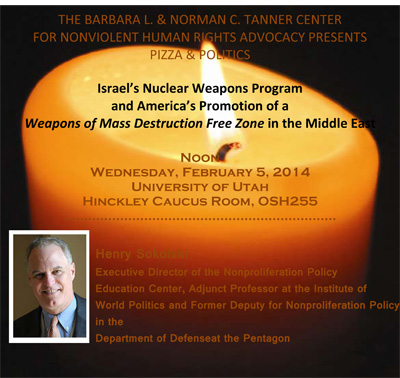 The Tanner Human Rights Center along with the Utah Film Center & Downtown Library announce the Film Screening- Inequality for All. Followed by a discussion panel with film director, Jacob Kornbluth. Visit http://inequalityforall.com/ for a trailer of the film.

Event audio and video recordings are found at the bottom of the page. 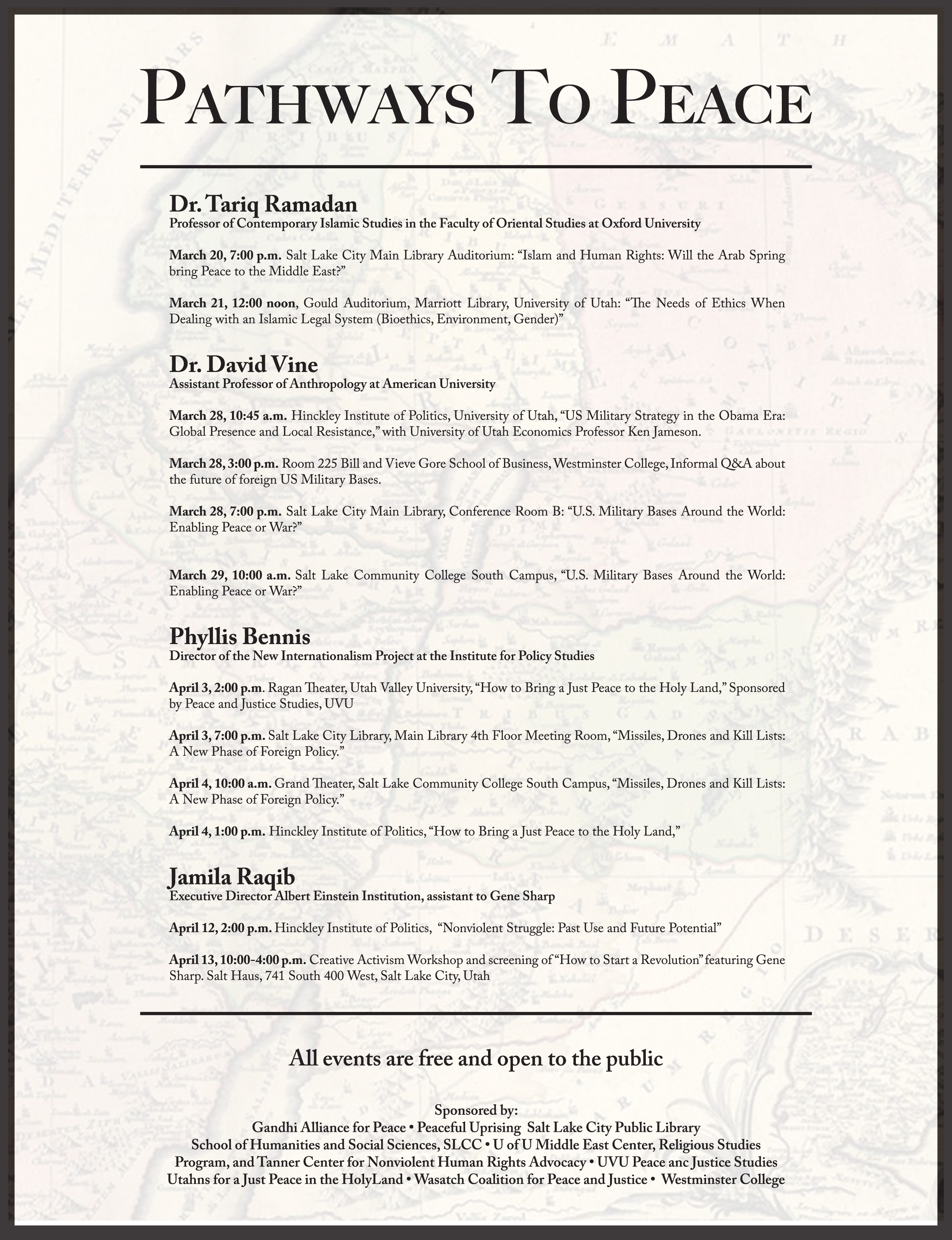 Islam and Human Rights: Will the Arab Spring bring Peace to the Middle East?

The Needs of Ethics When Dealing with an Islamic Legal System (Bioethics, Environment, Gender)

Nonviolent Struggle: Past Use and Future Potential

Henry D. Sokolski, Executive Director of the Nonproliferation Policy Education Center, Adjunct Professor at the Institute of World Politics, and Former Deputy for the Nonproliferation Policy in the Department of Defense at the Pentagon speaks on strategic nuclear trends and what we can expect over the next 10 to 20 years. For more information about Henry and NPEC visit:http://www.npolicy.org- external link View the video of the lecture here- external link.

In spring 2009, we co-sponsored the World Leaders Forum (with the Tanner Humanities Center) for an address by Cesar Gaviria, former president of Colombia and secretary general of the Organization of American States (OAS). Gaviria has been a staunch advocate for democracy in Latin America as well as a steadfast proponent of human rights and economic reform. As president of Colombia (1990-94), he promoted constitutional reform, the reintegration of armed rebels into civil society and significant economic growth. In his decade as secretary general of the OAS (1994-2004), he used his considerable skills as a conflict mediator to ease tensions across Latin America, initiated institutional change to reinvigorate the organization's inter-American agenda and fostered regional integration.

During the same semester, also co-sponsored (with the College of Humanities) a talk by Wangari Maathai, winner of the 2004 Nobel Peace Prize. Maathai was the first woman in East and Central Africa to earn a doctorate degree. It was while she served in the National Council of Women that she introduced the idea of planting trees with the people in 1976 and continued to develop it into a broad-based, grassroots organization whose main focus is the planting of trees with women groups in order to conserve the environment and improve their quality of life. However, through the Green Belt Movement she has assisted women in planting more than 20 million trees on their farms and on schools and church compounds. In 1986, the Movement established a Pan African Green Belt Network and has exposed over 40 individuals from other African countries to the approach. Some of these individuals have established similar tree planting initiatives in their own countries or they use some of the Green Belt Movement methods to improve their efforts. Wangari Maathai is internationally recognized for her persistent struggle for democracy, human rights and environmental conservation. She has addressed the UN on several occasions and spoke on behalf of women at special sessions of the General Assembly for the five-year review of the earth summit.

We are currently exploring partnerships with an array of organizations in the Salt Lake community to create forums on topics such as the future of nuclear weapons.