Write up is courtesy of U of U student Timothy White

Recruited as a child soldier in war-torn Southern Sudan, Mr. Jal escaped his situation and unbelievable challenges to become a successful and acclaimed recording artist and peace ambassador.  Join us in hearing this extremely resilient man draw on his personal experiences and background. 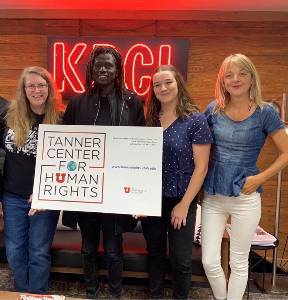 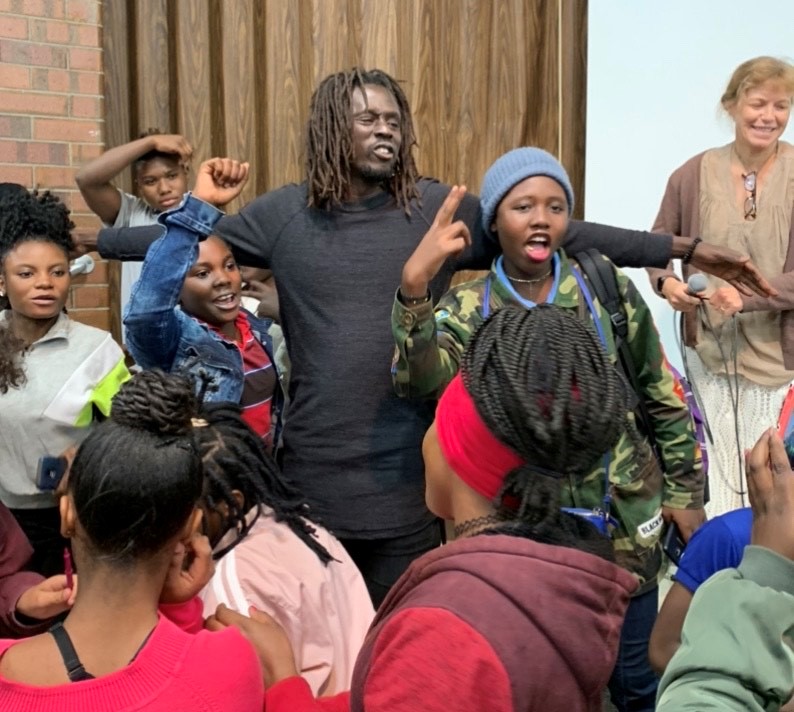 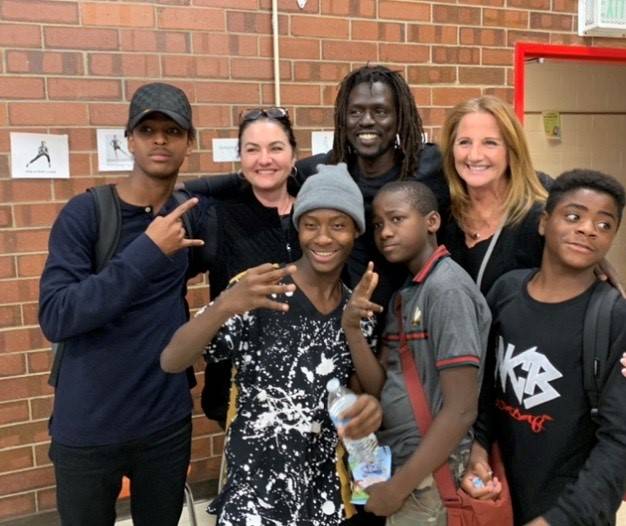 The Tanner Center and UCCD also set up a visit for Jal to the Utah International Charter School, a local public charter school that provides education to English-learning students, especially refugees and immigrants.

Brigitte Klement, community outreach and development manager at the Tanner Center, also spoke of the Center’s collaboration with UCCD and the Hinckley Institute. When UCCD invited the Center to partner for hosting Emmanuel Jal, the Center immediately jumped at the chance. Brigitte mentioned the perfect opportunity that Jal’s story can inspire the work for human rights. “Story telling is so powerful when it comes to social change,” she said.

In 2008 a full-length documentary on his life was released. The film, Warchild, won prestigious film festival awards worldwide. In the same year, his autobiography, also called Warchild, was published by Little Brown.

Jal travels around the world to spread his message of reconciliation and peace through music and inspirational talks. 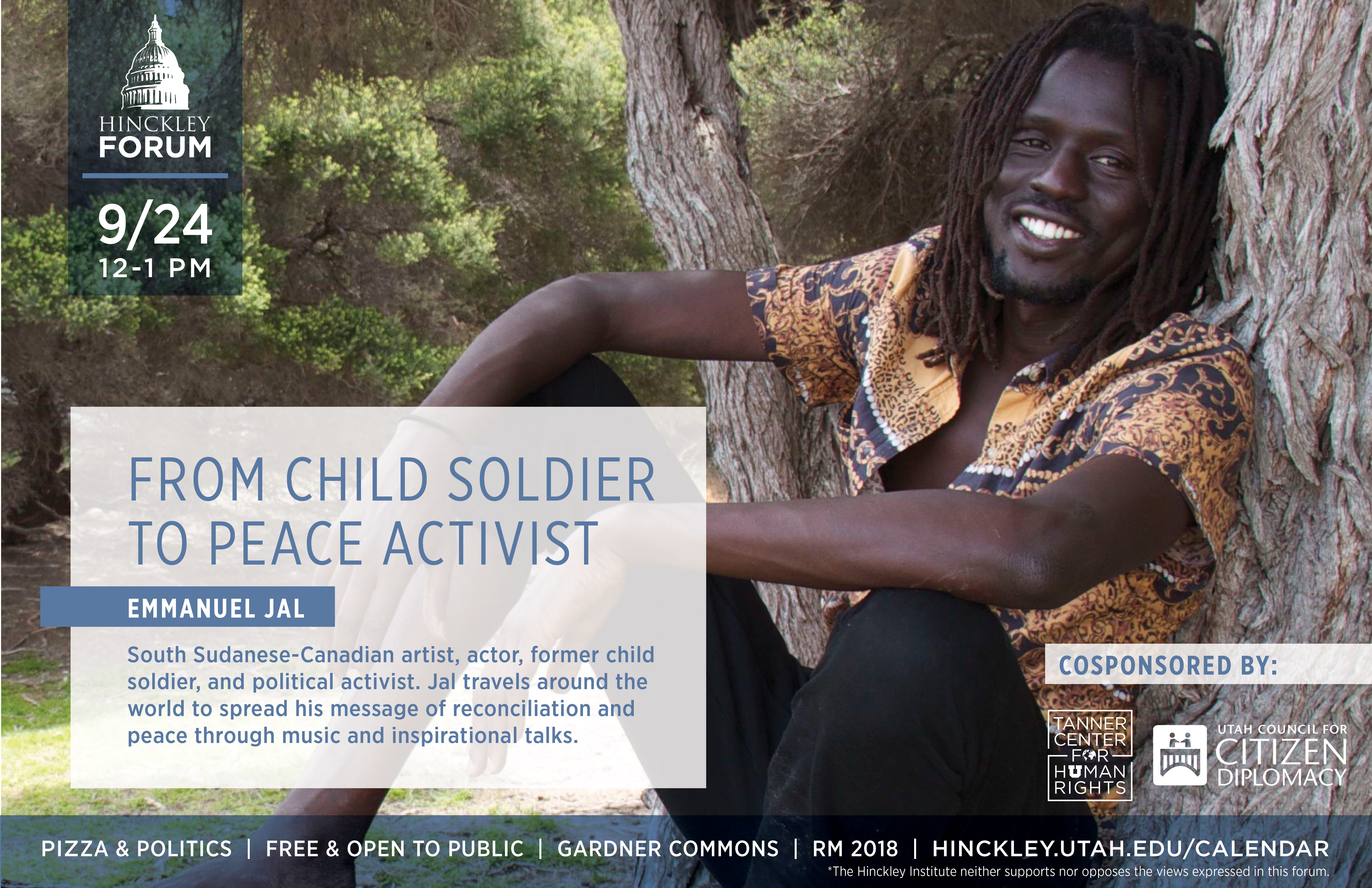 Moonlight Sonata: Deafness in Three Movements  presented as part of the documentary film series Through the Lens 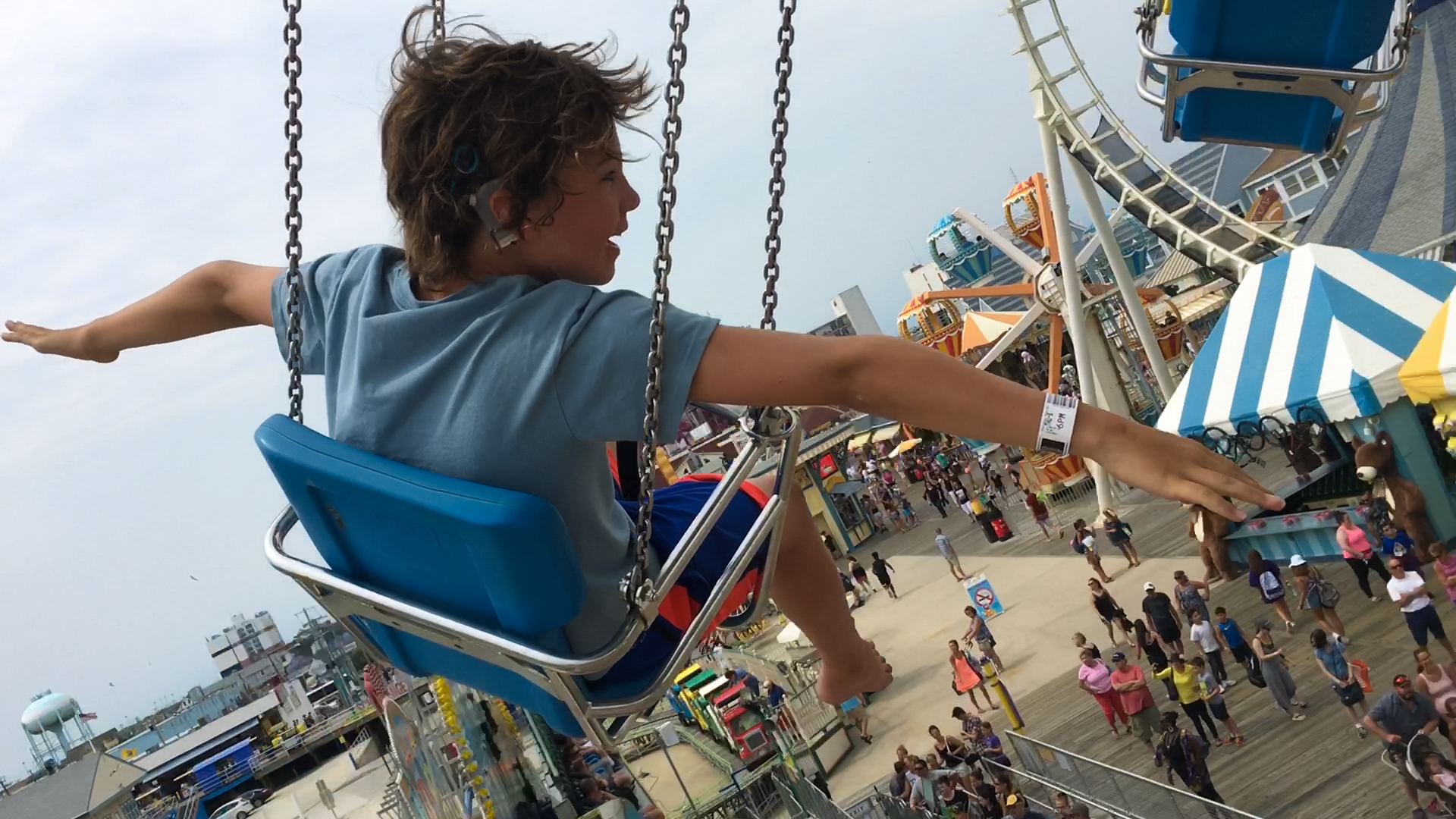 Director Irene Taylor Brodsky’s Moonlight Sonata: Deafness in Three Movements is a personal documentary on deafness in her family. Her story brings awareness to the experience of living with “superhero powers” such as the “ability to quite the world”. The film includes open captions to increase  accessibility for audiences. Listen to the Through the Lens interview.

Through The Lens screenings funded in part by:

In recognition of her outstanding contribution to advancing the global mission of the University of Utah. 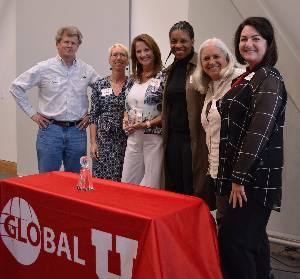 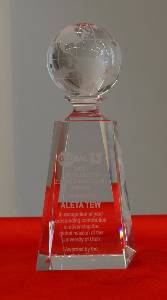 Award nominators emphasized her deep commitment to bringing human rights advocacy opportunities to students and the greater community.  She has spearheaded collaborative efforts with organizations such as Amnesty International, International Red Cross, Utah Coalition for Citizen Diplomacy, United Nations, Utah State Department of Education and more. She developed a K-12  human rights advocacy outreach program with curriculum designed to empower teachers with interactive human rights advocacy lessons in the K-12 classroom settings. She has been instrumental in bringing leading human rights activists focused on a wide range of issues such as sex trafficking, water rights, globalization, migration and the experiences of refugees in the US, religion, and conflict resolution and peacemaking to our campus. 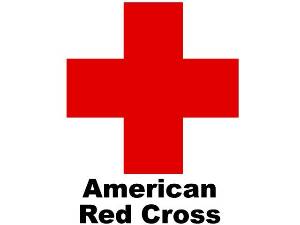 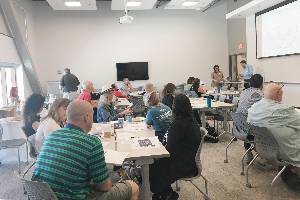 Watch Rules of War in a Nutshell.

Connecting classroom lessons to current events, teaching humanitarian law and its principles, promoting respect for the life and dignity of people affected by conflict and violence,  John Mejía, Legal Director at the ACLU and TCHR board member, along with Brigitte Klement, TCHR Marketing and Development Manager, equipped Utah teachers with tools to help young people increase:
•    Understanding of the aspects of International Humanitarian Law and its complex application to human rights issues;
•    Knowledge in international current events and humanitarian actions;
•    Capacity to view conflict situations at home and abroad from a humanitarian perspective;
•    Desire to become involved in community service in favor of the most vulnerable members of society.

Community Outreach: An Introduction to Human Rights in Action

Human Rights For Everyone, Everywhere World Civilization students participated in discussions designed to deepen their understanding of human rights around the world, locally and personally. Each student was presented with a copy of the Universal Declaration of Human Rights (UDHR).  East High School sophomores and juniors  were introduced to the 2019 Amnesty International’s Write for Rights campaign—the biggest letter-writing campaign in the world.

Students wrote over 40 letters to government officials around the world on behalf of these human rights defenders who are in desperate need of support. In their letters, students made connections to values articulated in the declaration—open society, democracy, inclusivity, equality, tolerance, diversity, respect and safety—putting its principles to good use.  Discussions around human rights and the seven Urgent Action Amnesty International cases were lively and inspiring. 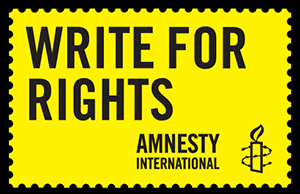 The Infiltrators, movie screening presented as part of the documentary film series Through the Lens

Directors Cristina Ibarra and Alex Rivera design a hybrid cinematic language, combining familiar documentary form and scripted narrative to map an uncharted domain: inside an Obama-era immigration detention system. Based on true events, The Infiltrators is both a suspenseful account of a high-stakes mission and an emotionally charged portrait of visionary youth fighting for their community. It’s about what happens to detained migrants, and what it takes to free them. 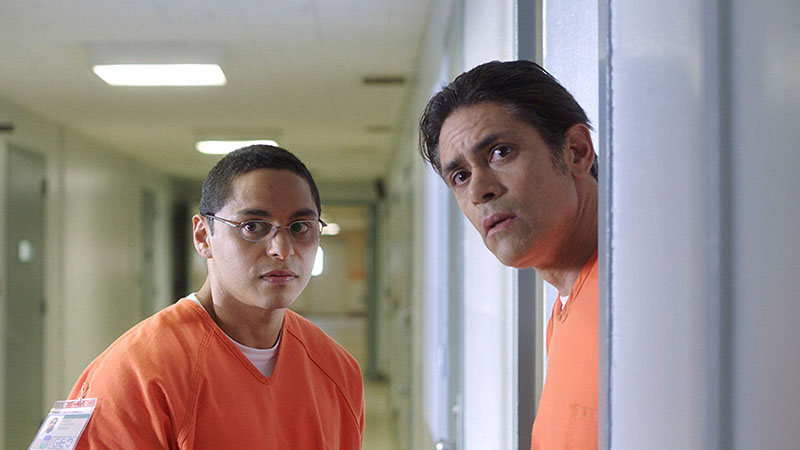 Without warning, Claudio Rojas is detained by ICE officials outside his Florida home. He is transferred to the Broward Transitional Center, a detention facility used as a holding space for imminent deportations. Terrified of never seeing him again, Claudio’s family contacts the National Immigrant Youth Alliance (NIYA), a group of activist Dreamers known for stopping deportations. Believing that no one is free as long as one is
in detention, NIYA enlists Marco Saavedra to self-deport with the hopes of gaining access to the detention center and impeding Claudio’s expulsion. Once inside, Marco discovers a complex for-profit institution housing hundreds of multinational immigrants, all imprisoned without trial.

Susi Snyder, who won a Nobel Peace Prize for her contributions to the International Campaign to Abolish Nuclear Weapons (ICAN). Those efforts include producing the report Don’t Bank on the Bomb, the only global report profiling the companies that produce that produce nuclear weapons, and the institutions that finance them. Building a Community Around Self-Reliance and Trust with Samira Harnish, Founder and Executive Director, Women of the World 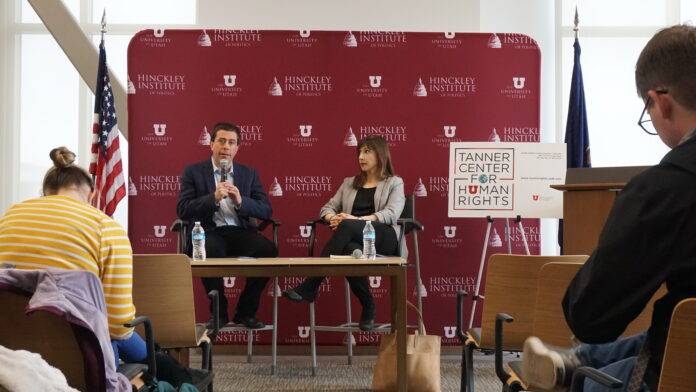 Read Letter: Thanks to Sen. Mike Lee for moving to end the conflict in Yemen 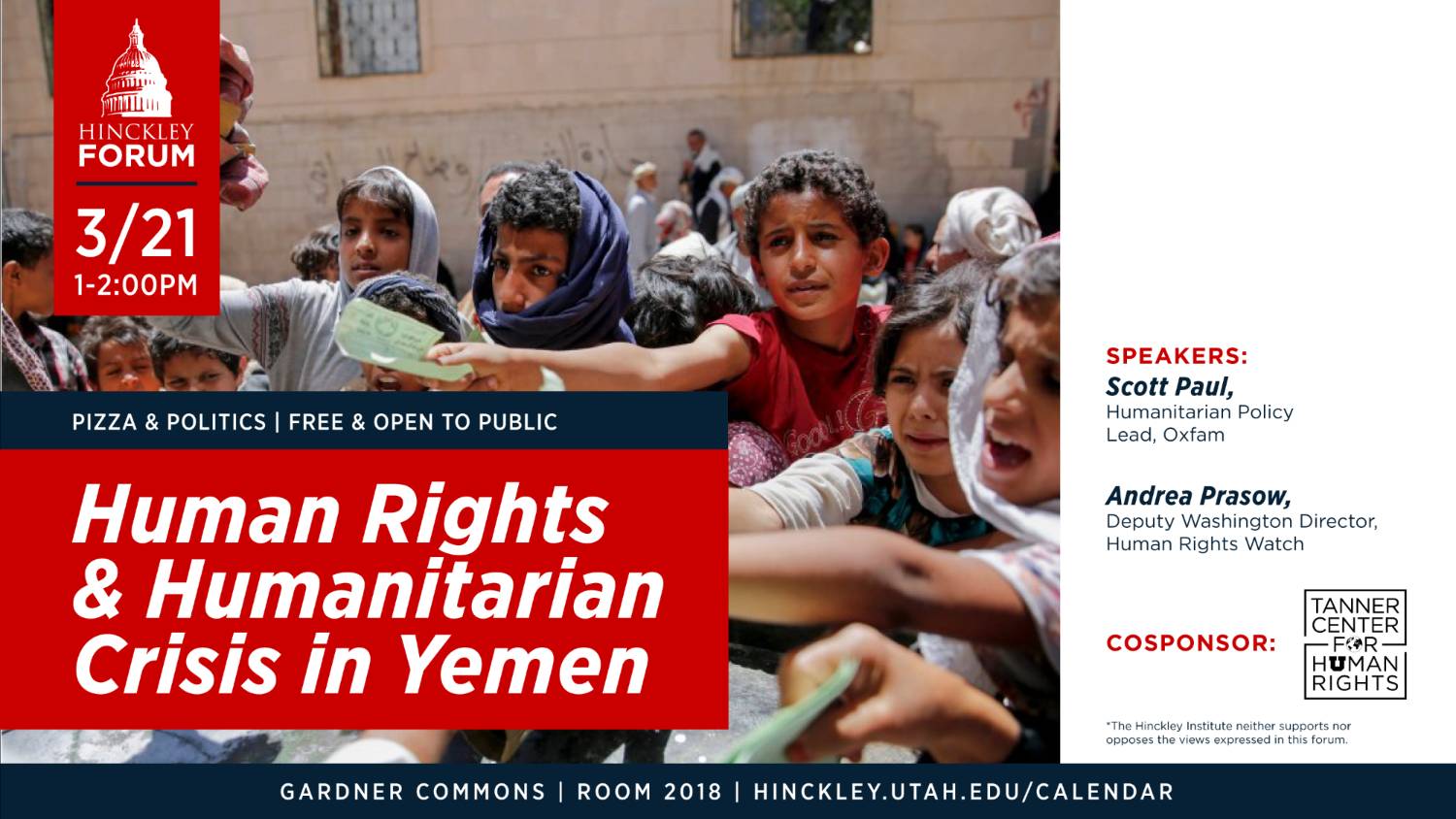 S.J. Quinney College of Law in collaboration with the Tanner Center for Human Rights igrants have taken a prominent place on the public stage in recent years, from divided political rhetoric on status of migrants in the United States, to news of migrant caravans traveling to the U.S. from South America, to the changing landscape of immigration law in the country, such as the upheaval of asylum availability or family separation at the border. These individuals are at significant risk for trafficking. Many are lured into migration by promise of employment, safety, or legitimate status in the country of immigration. Others are victims of crime such as kidnapping or sex crimes. The result is often enslavement, violence, torture and even threats of death.

Kathleen Kim, professor of law at Loyola Law School, is an expert on immigration and human trafficking who studies and writes about immigration law, workplace rights, civil rights and the 13th Amendment. She is a co-author of the first casebook on human trafficking, “Human Trafficking Law and Policy,” and was appointed to the Los Angeles Police Commission in 2013. The effort to battle trafficking is a major priority of two religious women’s communities that sponsor Loyola Marymount University: the Religious of the Sacred Heart of Mary and the Sisters of St. Joseph of Orange. Kim speaks here about the United States as a destination for those who are trafficked. This event was co-sponsored by the S.J. Quinney College of Law and the Tanner Center for Human Rights.

Community Outreach: An Introduction to Human Rights in Action

Human Rights For Everyone, Everywhere

In celebration of the 70th anniversary of the United Nations Declaration of Human Rights, students in world civilization classes at East High School learned about the importance of human rights this month thanks to the Tanner Center for Human Rights. Teacher Ms. Lynette Yorgasen invited Aleta Tew, TCHR center associate director, and Brigitte Klement, development and marketing manager, to bring the program 'An Introduction to Human Rights in Action' to her students. Talk about engaged learning!

Students learned about the history of human rights and of the United Nations. They participated in discussions designed to deepen their understanding of human rights around the world, locally and personally. Each student was presented with a copy of the Universal Declaration of Human Rights (UDHR). These sophomores, juniors and seniors were introduced to the 2019 Amnesty International’s Write for Rights campaign—the biggest letter-writing campaign in the world.

Discussions around human rights, the 11 Amnesty International cases, which focus on women human rights defenders who are under threat, and their relation to the UDHR's 30 human rights articles were ongoing and lively.  Students wrote over 78 letters to government officials around the world on behalf of these women, who are in desperate need of support. In their letters, students made connections to values articulated in the declaration—open society, democracy, inclusivity, equality, tolerance, diversity, respect and safety—putting its principles to good use.

“It is nice watching the positive change come over the students,” Yorgasen said. “This class has never been so engaged, ever!”