Salt Lake City Unanimously Passes Back From the Brink Resolution 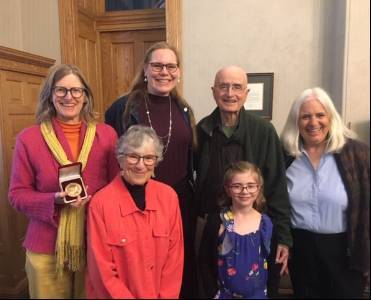 On April 2, 2019, the Salt Lake City Council members made history when they voted unanimously in support of a resolution calling to prevent nuclear war. The resolution was the culmination of cooperation among the  Utah Campaign to Abolish Nuclear Weapons (UCAN), Mayor Jackie Biskupski and her staff, city council members. The event coincided with a visit from Susi Snyder, a leader in the global coalition International Campaign to Abolish Nuclear Weapons (ICAN), which works to promote adherence to and full implementation of the United Nations treaty on the prohibition of nuclear weapons.

ICAN offered social media recognition to Salt Lake City, posting, "We are so happy to see this incredible level of enthusiasm, and leadership to end nuclear weapons from the local level. Together, we can protect our cities, and everything we love in them, from nuclear weapons!"

Congratulations to Salt Lake City and to UCAN on this resolution and for making a strong statement against our wasteful and dangerous nuclear policies.

The full text of the Salt Lake City Joint Resolution Supporting the United Nations Treaty on the Prohibition of Nuclear Weapons can be found here.